I can’t believe it, but I am already HALFWAY through my first class at AM! I have now finished week 6 which went by very fast and was a lot of fun. This week we learned about Overlapping Action and Follow-through. These principles are extremely important to animation because they really help bring an object to life. The concept of Overlapping Action is essentially that in most objects you will have some sort of overlapping action or actions that are delayed from the driving force of the motion. Some of the more basic and clear cut examples are a tail which creates that nice S curve or wavelike motion as the energy travels down the tail of animal. Another example which is what we did for our exercise this week is a pendulum.

A more subtle yet very realistic example of this is how a human moves their arm. The shoulder is the driving force and from there the elbow will follow ever so slightly after and then down the forearm into the wrist. There are so many things in life that have overlapping action it is quite amazing to sit and observe this stuff.

With overlapping action in animation there is a concept called “successive breaking of joints”. Essentially with this we are able to get that nice “dragging” motion that is delayed from the main force of the object. Since each “joint” is delayed just a few frames from the previous one we will get a nice overlap and follow-through in the motion.

Most of us probably understand what Follow-through is, especially if you ever played a sport, because coaches will always tell their athletes to “follow-through” on that (pitch, pass, kick, punch, swing etc.) this is because in a sport setting you are gaining the most energy and force possible for the action. But also because follow-through is NATURAL, especially in an object that has a lot of force with it, all that energy doesn’t just come to a stop abruptly so it follows-through the object even after the main action has happened. Combining overlapping action and follow-through really give great life to our animations but it is also quite difficult and takes a lot of tweaking to get just right.

So for our assignment this week we had to animate a Pendulum doing just about whatever we wanted it to do to show we understood these concepts. We also had to of course show our planning for the shot as well. I originally was going to do a simple move across the screen and stop action of the pendulum, and after I completed it and realized I still had a few days left in the week, I decided to do another version that was more complex and challenging and that is the version I ended up submitting for my assignment so below is my planning for both. 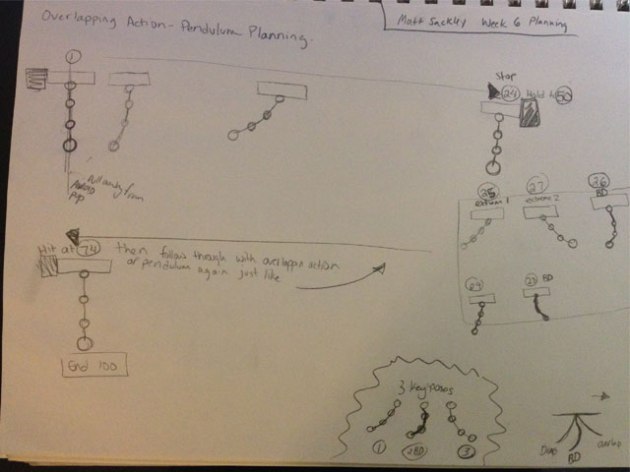 And here is the Final Animation prior to my mentor’s critique:

Here is the Revised Version